Barry is a dark comedy starring Bill Hader as a depressed, low-rent hitman from the Midwest. Lonely and dissatisfied in his life, he reluctantly travels to Los Angeles to execute a hit on an aspiring actor. Barry follows his “mark” into an acting class and ends up finding an accepting community in a group of eager hopefuls within the LA theater scene. He wants to start a new life as an actor, but his criminal past won’t let him walk away —can he find a way to balance both worlds?

I’m predisposed to liking Bill Hader and Henry Winkler, but this show is excellent otherwise. Stephen Root is great as Hader’s handler. Anthony Carrigan is hysterical as a deeply, deeply weird Chechen mobster. Paula Newsome does a ton of heavy lifting as a detective who keeps getting close to uncovering Barry’s secret.

It is also a really violent show, fyi. Barry’s a hitman and he kills a lot of people and none of the killing is “cool”. This isn’t John Wick. The killing in Barry carries a real weight that builds over the course of the season.

Another thing I enjoyed was the exploration of entry-level acting in LA. Here’s a good video of series co-creators Alec Berg and Bill Hader talking about that:

Donald Glover hosted Saturday Night Live this weekend and he was great. Sometimes funny actors aren’t so funny when they’re in the mix on live tv but he killed it.

While he’s rightfully getting a lot of attention for his new single, This Is America, I’m partial to the high-concept weirdness he pulled off on SNL, including this personal fave:

Michelle and I just finished the second season of The Crown, a Netflix original series that is a dramatic retelling of the life and times of the Queen of England. It stars Claire Foy and Matt Smith as the royal couple.
I don’t normally get down with the hour-long dramas but we’ve loved this. I don’t really know that much about the English Monarchy but I’ve been fascinated by the way they’re telling this story. I thought it was strange that an English production about English history would spend so much time framing the life story of their still-living Queen with the crumbling of the British Empire. It’s probably a testament to how well-written this show is that they can plainly show the poison of Colonialism and the British class system while creating a sympathetic figure in the head of state. A lot of credit has to go to Claire Foy for being able to be this sympathetic character (who really shouldn’t be getting any sympathy). Matt Smith is great as Prince Philip, a character that we both hate on many, many levels.

The 3rd season of the Crown will focus on a different decade of Elizabeth’s reign and will feature different, older actors in the roles. I think filming starts this summer and I’ll definitely make time for it when it drops.

Rolling Stone : Stories from the Edge

Rolling Stone : Stories from the Edge is a 4-hour, 2-part documentary from HBO about Rolling Stone Magazine. It tells the story from the magazine’s start in 60’s San Francisco and runs through the most recent US Presidential election. 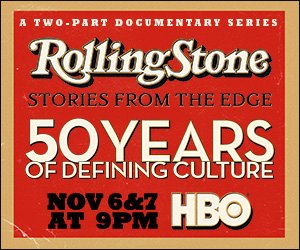 I remember liking RS in high school (which was the mid-late-80’s ). My folks weren’t Rolling Stone people but I have a friend whose parents were and I usually read it when I was at his house.

There was a lot for me to enjoy in this documentary: