Last Thursday was the first annual Hardywood Twilight 4-Miler, a 4-mile fun run through The Fan with Hardywood Park Brewery as the start/finish line.

The weather was perfect, the course was fun and flat, and the beer was delicious. I had tweaked my knee at softball on Wednesday so I wasn’t sure how I’d hold up. Everything worked out well and any knee tenderness was washed away by a couple of delicious cold ones. Good times.

With over 1500 runners we mobbed all of the streets on the course. The event description suggested that we’d have some police help to get us through major intersections but there were lots of cops along the whole route and they were straight-up stopping traffic for us to get through. There were lots of upset drivers and I expect there might be a different route next year.

Despite being an early and eager adopter of his Kingkiller Chronicles I haven’t followed him much otherwise. Here are a couple of recent videos I watched featuring Pat Rothfuss.

This first one is a roundtable discussion about storytelling in video games with Colin McComb (Torment), Jerry Holkins (From Penny Arcade), and Veronica Belmont (From Sword and Laser). It raised some interesting questions about storytelling but I don’t have the video game knowledge to get a lot of where they go. To me, Rothfuss came across as a whiny old baby crying because “they just don’t make them like they used to”. I hear this a lot when talking about modern music. That argument is bullshit. There is always good creative work happening but sometimes it takes more work to find it than you’re willing to put out. Holkins rightly calls him on it and Rothfuss gets it. It’s a good listen.

This Triangulation interview has a genuinely poor Skype connection but I liked Rothfuss a lot more after watching it. His process is something I’m definitely interested in. (That’s just a link to the page. I couldn’t get the embed link to work, likely an id10t error.) Here’s a tasty screenshot:

Links to both are via Patrick Rothfuss’ blog.

Ever since I got an office job (11/93!) I’ve been trying to find something better to carry my stuff in. I borrowed Ethan‘s 80’s-era Israeli Paratrooper Bag for a while. When he needed that back I moved on to a straight-up briefcase (with the little tumbler locks and everything) but it kept squashing my bagged lunch and it was stupid-heavy so it didn’t last long.

I used a Tom Bihn Large Cafe bag as my daily carry from 2004. It gave me a spot to carry pens/coffee cup/Treo Centro and it was the first “nice” bag I’d owned. Eventually I found that the pad on the Cafe Bag strap was crappy and moved too much. It looks like they’ve changed it since I had mine which is a good thing. I also needed more space for stuff as I would occasionally take files home and I added a notebook to my daily load.

I switched from that to a Tom Bihn Imago in 2007 for more space and a better strap but I gave up the dedicated pen and phone slots. I miss the pen slots more than I thought I would. The Nexus 7 does fit perfectly in the slash pocket under the main flap which means I carry it more often. The Imago is great for daily use but it’s not really great for travel because it doesn’t hold shape well if you carry non-flat things like clothes and it’s kind of small on the inside. I also feel like the asymmetric load distribution of messenger-style bags in general gives me neck or back pain if I’m carrying it for a couple of hours (ComiCon, dayhikes, airport terminals).

I’ve been shopping backpacks for a couple of years for improved ergonomics and to replace my Empire Builder as the bag that I use as an overnight or carry-on bag when I travel. The backpack options from Tom Bihn were either smaller than I wanted for travel or had too much of a mountaineering/overland-trek look for daily use to the office. The zippers and external bungies are probably awesome for more serious hikers and campers but they’re not what I want.

My backpack searching kept bringing me back to bags from GORUCK, specifically the GR1. It’s expensive but so damn sturdy that I feel like I’ll get my money out of it as something I’ll use every day. The GR1 is higher-volume bag than the Imago or the Tom Bihn backpacks I was looking at and a better fit for a man of my, um, proportions. A normal-sized Jansport would look like I’d swiped a bag from a middle-schooler.

After an embarrassing amount of deliberation and review-reading I settled on the GORUCK SK26. It has a clean look that I think lets me get away with carrying a backpack to the office but is overbuilt enough to handle any of the extracurricular work I might sign it up for. I gave the bag a thorough once-over and everything looked like it should. I’d read that some late-model GR1s were being shipped with loose threads or crooked MOLLE webbing or stitches. The SK26 I have is tight on all counts. I will pass along some initial thought shortly.

As a fan of the Mets I know better than to get excited in April. The quality on display here against a legit opponent makes it tough.

That was disappointing. I took a minute off of my time from 2012, which was good. I did not hit my goal of finishing in under an hour, which was not good.

I can point to some things during training that I can do differently to go faster next time. For instance, I really enjoy the YMCA training team but it occurred to me the other day that its purpose is to get you through the race as opposed to making you faster. It is a good, supportive group but there isn’t “coaching” happening. I’m not criticizing, I’m just observing. I plan to do the Y team again next year but I’ll add some elements that I think will help me get faster.

I’ve got at least 2 more 10k races on my calendar this year so there will be other chances at that 60-minute barrier.

The biggest thing I need to work on is getting over the mental hurdle of taking breaks. I am a huge fan of the brief walk but I do it too much. I tell myself that I do it to have something in the tank for the last push through the finish but I never get close to empty. When I’m on the bike and I’m stuck and struggling I can get to a mental place where I am able to focus and not let my body (heart rate, breathing) get out of control. I’m not there yet when I run.

I have liked a bunch of Noodlecake’s games, and I didn’t even know it. I played Super Stickman Golf and Trainyard to pieces. Adam tipped me off to the SSG sequel and I’ve spent the last week or two hacking away on it.

It’s an easy and worthwhile buck to spend.

Via OMG Posters are prints available from Telegraph Gallery’s “Galaxy” show, including this one from a fave of mine, Deth P. Sun.

I’ve got way too many 18″x24″ prints in the file at home to buy this one, unfortunately. I do enjoy seeing new work from Sun and I bet it would be neat to see it at this size. Everything I’ve seen from him has been smaller “Tiny Showcase”-sized.

This was my 5th year attending the Cycle North Carolina Spring Ride. 2013’s ride put Ronan, Ethan, and I back in Edenton, NC, the scene of the craziest weather we’ve seen on one of these rides. 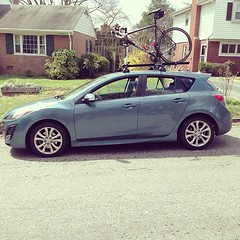 I finally got a bike rack installed on the roof of my little car so I could get myself to the ride. I enjoy a road trip as much as the next guy but I was really looking forward to a couple of quiet hours with a podcast or two for the drive. Driving myself also let me set my own schedule for riding or running errands (or hiding from historically scary weather). 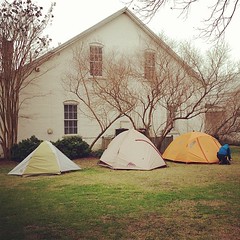 Early Spring brings crazy weather anyway but we seem to pull especially odd stuff when we camp for this ride. We finished pitching the tents just as the sleet started falling. Sleet that eventually gave way to rain but not the 2″ they were calling for. It was still freezing cold. We may have overindulged in some bourbons to celebrate successful tent pitching. Maybe. 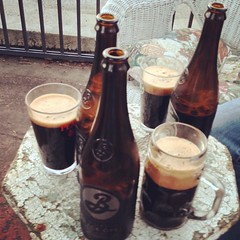 One of the things we riders are supposed to do is spend some money in the host town (meals at restaurants, shop at the shops, local hardware store for junk you need, stuff like that). Edenton happens to have a small wine and beer shop with a decent little craft beer selection. The three of us are hiding from the cold and checking out the beers when we see a bottle of Brooklyn Brewery’s Black Ops on the shelf. Some friendly chatter with the shop owner and we learned he had the one bottle on the shelf and 2 more hiding in the back of a cooler. Being good beer nerds we bought them on the spot and asked him to keep them cold until that evening. We rode bikes, showered, ate food, collected our bottles and sat enjoyed a couple of rounds of delicious, rare beer. 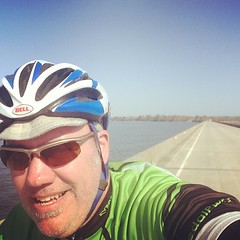 Friday’s and Saturday’s rides were cold and windy and each night’s sleep (in a small tent on a camping mat) was getting progressively worse. On Sunday the warm weather showed up and we said goodbye to the windswept farm roads to spend the morning pedaling through tree-lined back roads and neighborhoods. When we opted for the 37-mile route it included a sound crossing on a bridge. The view was incredible and I wanted a picture but didn’t want to stop and take one since it was a 2-lane 55MPH zone. So I pulled an Adam and took off a glove, reached back and took my camera out of my pocket, snapped a handful of photos, put the camera back into it’s bag in my pocket, all at 17MPH. Getting the glove back on was the hardest part. 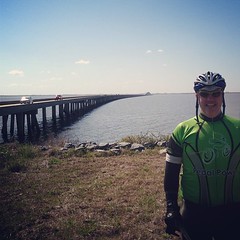 We stopped after crossing back over to get a quick picture because it was going to be tough to describe. The bridge went out low over the water and then had a high-ish hump in the middle of the 3 1/2 mile crossing. It was far, for sure and a terrific end to the weekend of bikes.

Jay Ryan’s site, The Bird Machine, recently got a redesign and today has some new prints on offer. Like always, they’re inexpensive and look sharp. I poked around in his store a bit and happened up this monoprint that I especially liked:

Sometimes those monoprints get too dark or inked up to make any kind of sense. This one works well thanks to all of the light colors.

The other cool thing I saw in his store is that he still has some 2013 subscriptions available. $850 is a big damn ticket for posters but you’re guaranteed one of everything The Bird Machine publishes as well as some cool members-only exclusive editions. I bought one back in 2007 and it was great. More posters than I probably wanted but it was a cool thing to get.

I’m still Spotify-ing away over here. I was slow to come around to the idea of paying to listen to music but not own any of it. Now I can’t imagine my commute-workday-commute without it.

Here is the link to the Q1 playlist for songs that I really liked. I’m already working on the Q2 list. It’s light right now but it’ll be shareable soon enough.